Felicia Day Give Birth to a Baby,Who is her Husband?Know about her Affairs and Relationship

Home » Rich People » Felicia Day Give Birth to a Baby,Who is her Husband?Know about her Affairs and Relationship

The Supernatural star Felicia Day has given birth to her first child on 30 January 2017 after over three weeks she announced the big news. The 37 years old celebrity revealed the news on twitter by posting a picture of her daughter’s tiny feet with the hospital’s tag wrapped around on that day.

Felicia also disclosed the name of the baby on twitter. She revealed the news of her pregnancy just before three weeks of her delivery. But she has not mentioned the name of the father of her child. She favors keeping her relationship private.

Although it’s Felicia’s first child, she seems to know a lot about motherhood as she gave an advice to another mother about breastfeeding. She must have done a lot of research and have been fully prepared to be a mom.


The star and creator of The Guild gave a unique name to her daughter. She mentioned her daughter’s name on twitter along with the picture captioned “Oh yeah Calliope Maeve has hit the world. Currently wearing a onesie that says ‘Bard in Training’  Calliope Maeve is a pretty name. 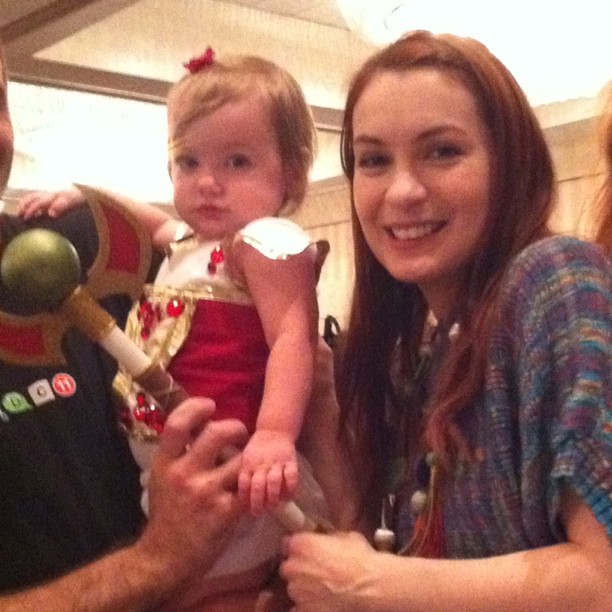 She picked a unique name for her daughter. She might have thought about it for a long time as she named her daughter on the day of her birth.

She posted the picture of her daughter’s little wrinkly feet wrapped with the hospital’s tag. Her admirers were really quick on congratulating her on her new beginning.

She also posted a beautiful picture with her daughter on Instagram.

Finally feeling like myself. I combed my hair and everything! (Combed Calliope’s too)

Before she gave birth to little Calliope she also posted a picture of her baby bump with her shirt unbuttoned revealing her 37-week old hump on January 3, 2017.

She’s coming in like three weeks so I guess I should announce this and stuff.

She seemed pretty excited as she wore a trucker cap which reads ‘ As seen on YOUR MOM’.

Who is the Father of Felicia’s Daughter

Felicia has been giving the updates about her baby since she was pregnant but she never revealed the name of her daughter’s father. She seems to be keeping her personal life private. Although her fans are interested to know about it but it’s her choice and we support her. Image: Felicia Day with her daughter

As for your information, she has been in a relationship with Nathan Fillion in the past but she has not revealed the real dad of her daughter.

Also Read: Colleen Lopez Living Happily with her Husband, No Children and No Divorce Rumors

Felicia’s Past Affairs and Relationships

The star of Supernatural seems to be pretty protective of her personal life. As you all know now that she gave birth to a daughter named Calliope Maeve and has not yet revealed the name of the person who fathered the beautiful princess.

We mentioned earlier that she dated Castle’s star Nathan Fillion in the past but she has not revealed who she dated after him.

I keep reminding everyone I kissed @feliciaday. All the time. #DrHorrible

She also hasn’t disclosed any information about her past relationships. She is keeping those things private and it looks like she doesn’t want her personal life to be public.

Video: The Guild – Do You Wanna Date My Avatar: Felicia Day

Anyway, we know for sure that she is a brilliant artist and we love her work. We congratulate her for the new beginning and for her new adorable member of her family. We wish her luck for the future. Stay tuned for more updates.